The cupola-crowned Royal Exchange in New York City housed the first meeting of the Supreme Court on February 1, 1790, when New York was the nation’s temporary capital. Justices deliberated on the second floor of the gambrel-roofed hall. A brick arcade shades the ground floor, an open air market where Broad and Waters Streets intersect in what is now the financial district. The scene at the Court’s scheduled opening was “uncommonly crowded,” according to the New York Daily Advertiser. Only three of the six justices were present, however, so the court was adjourned until the following day. Once a quorum had assembled, the Justices’ first order of business was to appoint a court crier and a clerk, and to admit lawyers to the bar. The Court heard no cases during its first term. After two sessions in New York (February 1-10, and August 2-3, 1790), the Court reconvened in Philadelphia, joining the rest of the federal government there when it became the new national capitol.

Philadelphia’s Independence Hall sheltered the Justices for two days in 1791 – all they needed for their February term since they still had no cases to decide. In August they met in Old City Hall, which served them for a decade. The Justices met in the east wing of City Hall, which also housed the state and municipal courts, while Congress met in the west wing.

A 1789 Act of Congress, requiring Supreme Court Justices to preside twice a year over circuit courts scattered throughout the Union, meant months of ragged travel. “Circuits press hard on us all,” moaned Chief Justice John Jay. After jolting in a stagecoach many hours daily over savage roads of ruts and rocks or helping lift the stagecoach from quagmires of mud, the Justices passed restless nights in crowded way stations. Battered and exhausted by the rigors of travel, Justices often arrived at the circuit courts too late or too sick to hold a session. Still, their visits served to acquaint the people with the new judiciary branch. 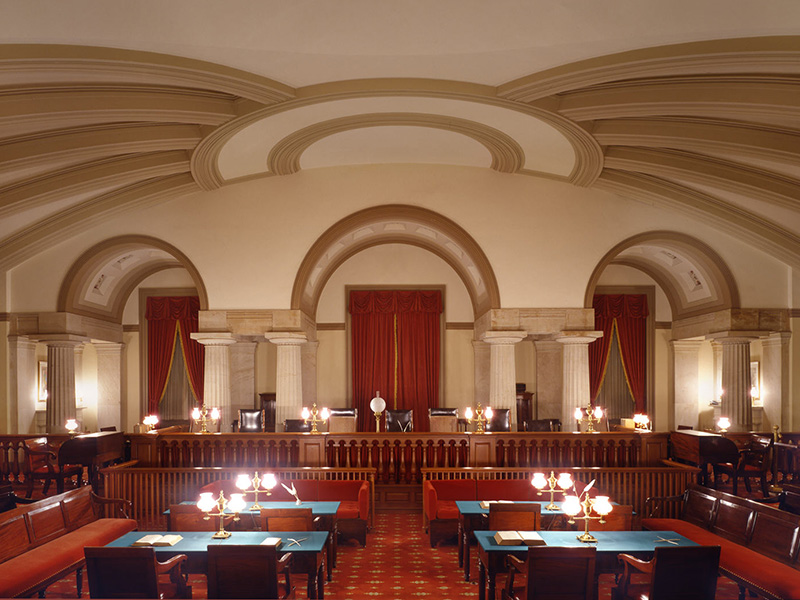 The Old Senate Chamber, located in the Capitol. Earliest known photograph of the U.S. Capitol, 1846. Architect of the Capitol

When the seat of the federal government was transferred permanently to Washington, D.C., in 1800, no provision was made for housing for the Supreme Court. Less than two weeks before the Court was to convene, Congress resolved to let the Court use a room in the Capitol. The Court moved into the Old North Wing (image above), meeting in various rooms from February 1810 to December 1860. During the early years when construction displaced the Justices, they had to meet in nearby homes or taverns. Eventually the Court occupied a courtroom that had been especially designed for it in the basement beneath the new Senate chamber. When the Court moved upstairs in 1861, the old courtroom became the law library for both Congress and the Court, seen here in this c. 1895 photograph. The Supreme Court was housed in what is now called the restored Old Senate Chamber from 1861 to 1935. Although the chamber was more spacious and dignified than the basement one, there was no dining room (the Justices lunched in the robing room), and no individual office space for the Justices and their staff (the Justices often worked at home).

Chief Justice William Howard Taft (third from left) and the Associate Justices admired architect Cass Gilbert’s model for a new Supreme Court building in 1929. Taft had begun lobbying for a separate building as early as 1912, and redoubled his efforts when he became Chief Justice in 1921. Taft not only persuaded Congress to fund the nearly $10 million building, giving the Court its own home for the first time, but he also oversaw its planning and initial construction. When the cornerstone was laid in 1932, Chief Justice Charles Evans Hughes said of Taft, who had died two years before: “This building is the result of his intelligent persistence.” To a country sunk deep in the Great Depression, Chief Justice Hughes added: “The Republic endures and this is the symbol of its faith.”

Gleaming bone white and austere among its distinguished neighbors on Capitol Hill, its stately façade evoking the long-enduring glory of ancient Rome, the Supreme Court Building imposes a mood of decorum. The aura of formality is no accident.

When architect Cass Gilbert submitted his design in May, 1929, he planned “a building of dignity and importance suitable…for the permanent home of the Supreme Court of the United States.” Gilbert has been chosen by a commission led by Chief Justice William Howard Taft. Gilbert’s associates were Cass Gilbert, Jr., and John R. Rockart, with executive supervision by David Lynn, Architect of the Capitol.

Into the Building the architects put about three million dollars’ worth of marble. For the exterior walls alone a thousand freight car loads of flawless stone come from Vermont—along with a 250-ton slab specifically cut for sculptor James E. Fraser’s allegorical figures at the entrance.

Georgia marble was chosen for the outer walls of four courtyards that divide the building into a cross-shaped center core and a gallery of offices and corridors. Nearly square, the resulting structure is 92 feet high and stretches 385 feet on its longest side. The interior walls are faced with marble quarried in Alabama.

Opposite the formal entrance, at the east end of the aptly named Great Hall, is the Court Chamber proper—82 by 91 feet, with a coffered ceiling 44 feet high. Gilbert walled this imposing room with Ivory Vein marble from Spain. For the 24 massive columns he insisted on marble of a particularly delicate tint, called light Siena, from the Old Convent quarry in the Italian province of Liguria.

From Italy the rough stone went to a firm of marble finishers in Knoxville, Tennessee, who dressed and honed the blocks into 72 slightly tapered cylinders, 11 feet in circumference at the widest. Three sections went into each 30-foot column, to be topped by an Ionic capital.

Darker marble from Italy and Africa gives color to the floor. Against the marble the room gains richness from its fittings: tones of red in carpet and upholstery and heavy draperies, highly polished luster in solid Honduras mahogany, gleaming bronze latticework in gates to the side corridors. And in 1973, new lighting, new paint, and new gilding restored the ornamented ceiling to a brilliance time had since dimmed since its installation nearly 40 years before.

Like Taft, Gilbert did not live to see his dream building completed. He died in 1934. The Court held its first session in the new building on October 7, 1935.

Not everyone liked the new building. Associate Justice Harlan Fiske Stone, who later became Chief Justice, at first called it “almost bombastically pretentious…wholly inappropriate for a quiet group of old boys such as the Supreme Court.” One of the old boys reportedly said that he and his brethren would be “nine black beetles in the Temple of Karnak.” Another—undoubtedly thinking of exotic pomp rather than domestic party symbols—remarked that the Justices ought to enter it riding on elephants.

Such comments suggest how different men have regarded their own remarkable positions of power, prestige and responsibility in the life of the Nation. Off the bench their successors show a similar concern—how to maintain a sense of human perspective in the marble temple.

As the Conference has decided to hear oral arguments by telephone in May, an unprecedented development, we thought we would look back to the arrival of phones at the Supreme Court. Rotary telephones were installed in the Justices’ Chambers when the building opened in 1935, but they were not actually hooked up until they moved in. This photo shows George Sutherland in his Chambers, his black phone visible on his desk, on March 25, 1937–his birthday. Oliver Wendell Holmes Jr. abhorred “modern improvements,” especially the telephone. He and Louis Brandeis relied on their clerks to make phone calls for them in the era when the Justices still worked out of their home offices.